Are you finding the answer to the heartbreaking question “Is my girlfriend cheating on me?” Have you ever been confused if your girlfriend is cheating on you for want of signs and proof?

Your girlfriend is cheating on you if she has started hiding secrets, being too busy to have time for you, changing her usual ways of making up, and keeping her phone on high security, and other signs listed below.

Therefore, knowing the signs of a girlfriend cheating, on the other hand, can take some detective work, especially if you want to and should avoid invading her privacy.

But here are the obvious signs you should certainly watch to see if your girlfriend is cheating on you.

[pinterest-image message=”Are you finding the answer to the heartbreaking question “Is my girlfriend cheating on me?” Have you ever been confused if your girlfriend is cheating on you for want of signs and proof?” image=”https://grabalerts.com/wp-content/uploads/2021/07/signs-my-girlfriend-is-cheating-on-me-100-scaled.jpg” custom_image=”https://grabalerts.com/wp-content/uploads/2021/07/signs-my-girlfriend-is-cheating-on-me-100-scaled.jpg”]

What are the first signs of cheating?

According to experts, the first signs of cheating are:-
• Becoming increasingly difficult to reach.
• A shift in phone usage pattern.
• A drop or an increase in libido.
• Their friends don’t appear to be as welcoming as they once were.
• They suddenly start paying more attention to their appearance than ever.
• Their schedule for the day changes without good reasons and explanations.
• They start blaming the partner for cheating.

These are the signs to watch out for to know “is my girlfriend cheating on me”.

1. She begins chatting with strangers for long periods.

This is one of the most serious and visible signs that your girlfriend is cheating on you. You were her chatting partner who made her more attached to her phone before long.
However, if you notice that your partner has been using their phone a lot lately, and often with strangers, even if she is being very discreet about it. This should alert you to the presence of a red flag, indicating that she is cheating.

2. She is busy and begins to conceal her movements.

She used to have all the time in the world for you, but her schedule is now extremely tight and packed.

When your girlfriend becomes secretive about her schedule, it is a clear indication that she is hiding something.

Surprise visits, which once filled her with joy and fun, no longer seem appealing to your girlfriend. She rushes you out and frequently puts off your spontaneous gestures.

She used to be so enthusiastic about going out for a picnic, trying new restaurants, and even staying around you for a moment, but now she sees those activities as not worth her time, and she may even be too busy to talk to you properly, all of which she blames on work.

This indicates that cheating is at the corner.

3. When she begins to keep secrets

When both partners are open to each other, the relationship is true. But when your girlfriend begins to keep secrets, you should know that she is cheating.

This is evident when she tries to act otherwise by changing the subject when a serious topic is brought up between the two of you. It is highly suspicious and one of the most obvious signs of a cheating girlfriend.

4. She starts developing a new personality.

People change over time, but the changes are usually subtle: a new interest here, a new habit there, a new perspective on one or more topics.

If your girlfriend’s changes are sudden and extreme, she is most likely under the influence of someone else. Which connotes girlfriend could be cheating on you. 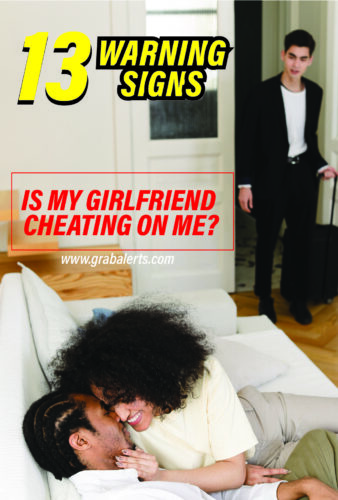 is my girlfriend cheating on me ?

The adage “the eyes are the windows to the soul” holds a lot of truth. If she won’t look you in the eyes, it’s because she’s either lost interest in you or wants to keep something from you.

ALSO READ  How to Respond to I Want to Kiss You Text: Over 30 Reply

Keep an eye on where her gaze goes whenever the subject becomes serious.

This is an easy way to tell if your girlfriend being truthful with you or cheating on you.

6. She has her phone set to high security and pays close attention to it.

A cheating girlfriend uses her phones and computers more frequently than before, and she protects them as if her life depended on them.

Take note of how she behaves when she is on her phone right next to you or when you enter the room while she is on her laptop. She is always suspicious that you’re looking at her phone. Sometimes she would be looking over her shoulder to see if you’re reading her texts or getting too close.

Though she has every right to keep her phone to herself, if she has made it a full time just to make sure you’re not looking at it; it a big sign to watch that your girlfriend is cheating, which shouldn’t surprise you any longer. 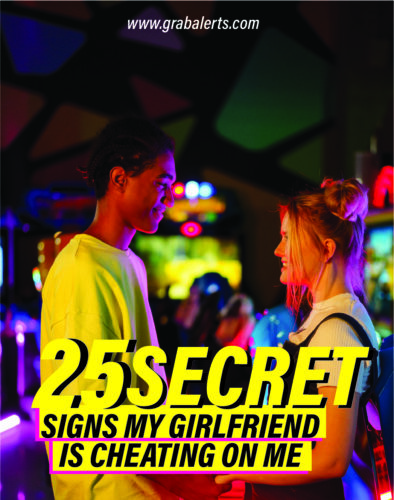 signs of a cheating girlfriend

7. Seeking reasons to complain and argue

This is yet another sign that your girlfriend is cheating on you. The complaints can take many different forms, but they all boil down to one thing: she isn’t happy.

She becomes enraged at even minor mistakes. The relationship is no longer satisfying her in the same way it once did.

She told you back then that she could overlook your flaws. They all stand out like a mountain in front of her now. And if that’s the case, there’s a good chance that cheating is now a red flag.

8. If she is easily distracted.

The issue may not manifest itself in a hectic schedule; she may simply express her desire to be somewhere else.

When she’s with you these days, she may appear to be frequently distracted. Even if she is physically sitting next to you, her mind is elsewhere or with someone else.

Your problems and complaints are no longer of interest to her here. Whatever the case may be, she simply does not have the time or patience to be concerned.

If she is no longer emotionally focused on you, she may be making herself available to someone else instead, which is also a sign that she is cheating.

9. When she loses faith in you.

Several studies have shown that a girl who cannot trust her boyfriend cannot be trusted likewise.

Only a cheater can accuse another of cheating. Not only will she accuse you of being jealous, but she is also frequently jealous.

Her jealousy can manifest itself in a variety of ways. She may begin harassing you about every girl you see on the street, claiming you were staring at her or had something to do with her, even with female friends or coworkers.

ALSO READ  What Does Daddy Mean in a Relationship? Full Details

On the other hand, she may become playful and try to embarrass you into admitting you are attracted to someone else.

This newly discovered jealousy is a very common sign of a girlfriend cheating and trying to relieve her guilty conscience, regardless of how she manifests it.

10. Her kisses no longer come with passion.

As with several of the other signs your girlfriend is cheating listed above and below, this could simply be evidence of a problem in the relationship rather than proof of cheating.

It is just another piece of evidence that she is on her way out of the door and that she may have someone waiting for her there.

11. When she loses her seriousness.

To fully comprehend this sign, you must contrast her concentration with her loving past attitude toward you.

More than simply her dialogue demonstrates her lack of seriousness in her intentions.

However, if your girlfriend suddenly loses interest in the things she used to want and crave; she’s not even interested in discussing them; she has lost some interest in your relationship and may have developed an interest in another

Your girlfriend may have had no problem expressing her affection and telling you “I love you” at least seven times a day when you first started dating.

But if she starts having trouble pronouncing it, I’m afraid there’s a red card on the way.

She can try to avoid saying the words by shifting the subject or simply dismissing your attempt to impress her. Otherwise, she might just mumble the three syllables to get it out of her system without truly speaking it.

If there’s no passion behind your relationship’s most important phrase, there’s a problem or cheating on the horizon.

13. She is no longer interested in having sex with you.

The simplest way to make her happy was to get her on for some fantastic s-x. However, you’ve noticed that getting her interested in s-x has been more difficult recently. This could be a symptom of infidelity.

We all know that relationships have ups and downs, but if you feel like she’s pulling away from you and doesn’t want to be intimate; if she used to kiss you all the time and then suddenly stops, there’s a reason.