Just after Betty called me from Ohio asking how to get a guy to stop asking for pictures, nude pictures for God seek?. Truly! This guy must be nuts.

I became worried enough to dig out why do guys keep asking for pictures, help her with ideas to stop him without losing the relationship, and a funny response to send me a pic kind of guys.

Why Do Guys Want You to Send Pictures?

A guy wants you to send your picture to him because he finds you attractive and wants to show you to his friends proud he is of dating a person like you. Keeping these pictures could lead to a long-lasting behavior or a way of getting closer to you.

Some guys met girls who appeared beautiful in their photos, but then personally, totally different and ugly due to the availability of photo filters and editing Apps.

Some people want to make sure all of these photos are not deceptive and that you appear like the photo that originally attracted him due to many fake profile photos on the internet.

Why Do Guys Keep Asking For Pictures?

Guy keeps asking for pictures because they want more of your images to refresh and justify his attraction towards you. He’s trying to figure out if you look good all the time or just in specific photographs because girls have so many varying looks.

On the other side, some other guys will keep your photos fantasizing about having sex with you. They keep asking for photos of your face, boobs, and anything else that is not clothed. This could lead to this set of men asking for nude or more dirty pictures.

Tell the truth. “I’d rather not send you a photo.” You shouldn’t have to explain why, but you may say you have your reasons if they ask you. And if they insist, answer, “I prefer not to tell you the reasons.”

These pictures, which were meant to be private, could be used for blackmail and possibly on pornographic sites.

Warning: According to DoSomething.org, 60% of all sexters who have sent nude pictures agree to feel compelled to do so at least once. see this post about facts on sexting and sending nudes

See this set of topics to chat with a girl on WhatsApp I have considered to be appropriate.

Tips on How to Get a Guy to Stop Asking for Pictures.

You can get to stop a guy from asking for dirty pictures online. Tell him that you find the request very offensive and tell them to desist from such actions and let them know their actions’ consequences. You could block such contacts on social media or messaging Apps when they persist and report to appropriate authorities.

This response will do well to stop him from further asking for dirty pictures from you on WhatsApp, Facebook, other social media platforms, or Dating Apps.

In a situation where he persists and refuses to stop requesting

Be Polite, Outspoken, and Keep Up with Your Convictions.

No apology or explanation about why you don’t wish to send a photo is necessary. Simple, direct, and honest, maintain it. In my experience, These men will try changing your mind about sending a photo but keep up with your convictions.

So when Betty called me, I shared these polite responses declining to send pictures while texting someone she knows directly or indirectly:

Keep Up with Your Conviction – (A Rude Request don’t Deserve a Polite Answer).

Why be nice if you’ve previously answered no and they ask again?

They plainly do not value your response. So, do you have to be polite in response to their frequent requests?

The answer is no. here are some responses when he keeps asking for your pictures after you had said ‘No’ politely.

There are better questions to ask a guy to get to know him deeper.

Get an Evidence and Talk to Someone.

You must take this next step.

Assuming this takes place online on social media or chat platforms, take a screenshot of the improper request and your response.

If you can’t capture a screenshot, save the conversation in another method so you can look at it or make use later as a piece of evidence when needed.

If this isn’t available online, make a note of where and when it occurred, and notify a close friend as quickly as possible.

Set Boundaries and Keep Up With Your Limits (Block His Contact).

Understand that when you issue a warning like this, you are committing. Consider it seriously.

If you don’t believe you can block them, you can apply other penalties, such as “I won’t talk to you for a week” or whatever else is reasonable.

You can stop him from making further requests or conversations by blocking him from your account or chat platforms.

This post on how to blog a guy from your social media accounts will be helpful.

Take a screenshot of this conversation, or inform a close friend if it’s not online.

Some individuals are upset when blocked or limits are enforced, so they may threaten you or spread lies about you. This is why there are screenshots.

If they continue to cause problems, you may have to contact the authorities.

If you’re still young enough to live with your parents, start with them, even if it’s awkward.

If something didn’t happen online, screenshots or the testimony of your friends might be useful here as well. 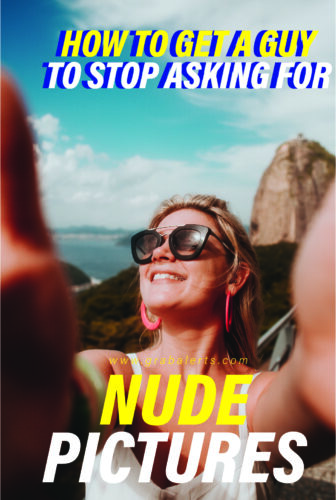 If you are underage, remind him that conviction of unlawful sexting or child pornography carries serious penalties.

ALSO READ  100 Things You Should Know About Your Boyfriend.

Aside from jail time and other penalties, you might be dealing with the consequences of the violation for the rest of your life.

If you live in the United States, you can get a cease and desist order to stop further harassment.

Always remember that once you put a naked photo of yourself, you lose control of it, and it will be there in perpetuity.

One of the most harmful things over the internet or on social media is sending nudes to anybody. It’s circulated so effortlessly.

It will only be an issue when forced to do so because a polite guy will not insist. He will appreciate your choice of reason.

What should I consider when sending pictures?

Just before you press “Send” to send your nude pictures to that guy, it is important to stop and consider the following:

What to do if you already sent your nude pictures.

There are actions you can take if you have sent a nude and are scared about what may happen: 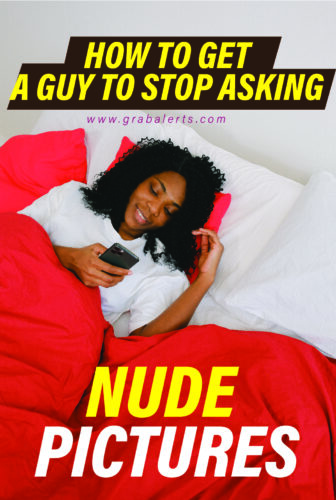 How to Get a Guy to Stop Asking for Pictures

100+ Topics to Chat With A Girl on WhatsApp and Impress Her Instantly
Why is He Avoiding My Snapchat Story? Reasons and Tips
To Top