Have you ever imagine why your friend suddenly turns to hate you so much? If so, what are the signs that my friend hates me?

Your friend hates you because people’s attitudes toward others change over time due to new life experiences, new friends, age, and a variety of other factors. Despite all that, What matters, in the end, is how you deal with the change.

Signs and Reason Why Does Your Friend Hate You

Here are the obvious signs you would see in your relationship with such a friend.

1. When you speak to them, he or she ignores you.

Communication is essential for establishing and maintaining a relationship. It’s nearly impossible for best friends to go a day without speaking to each other.

One way to tell if a friend hates you is to observe their level of interest when conversing with you. They frequently go so far as to pretend not to hear you when you speak to them.

2. You two don’t agree on anything.

Everything, including values, preferences, and dislikes, is usually agreed upon by best friends. Now and then, one questions the other, but everything works out in the end.

However, there is a problem if you begin to notice a disparity on issues where you previously held similar beliefs. This is one of the most obvious indications that your best friend hates you.

They openly oppose everything you say, regardless of whether it is true or false. It may even appear that your close friend no longer respects or believes your word.

3. They rarely interact with you in public.

Close friends out and about in public with each other is always a sight to behold. Observing how friends who are close to each other interact in public is one way to learn about them.

When close friends have a falling out, you rarely see them together in public. When they see you, they sometimes act as if they don’t know what you’re talking about.

4. Your friend frequently says hurtful things behind your back.

It’s unthinkable that your friend would say hurtful things about you behind your back.
When your close friend starts spreading false rumors behind your back, this is one of the signs that they aren’t a fan or are hating you.

Hearing what someone you value and love has said behind your back can be heartbreaking and demoralizing at times.

5. You continue to have squabbles.

Close friends frequently disagree and quarrel over issues. However, it is best to keep an eye out for when it becomes an ongoing issue in the relationship.

You may have noticed that even when you put your best foot forward, your friend finds fault with everything you do. This is one of the subtle signs that your best friend hates you or develops a dislike for you.

6. They do not apologize when there is a misunderstanding.

Misunderstandings are unavoidable in friendships, but how they are resolved is critical.

If, on the other hand, you notice that your friend finds it difficult to apologize after a misunderstanding, it is likely that they hate you.

Even if you are at fault, someone who cares about you will look for ways to resolve any issues between you two. On the other hand, someone who hates you sees every misunderstanding as an opportunity to cut you off completely.

7. Your interactions are short and simple.

When a close friend hates you, it will show in your conversations and how you interact with one another.

You may have noticed that when you talk to them, they become physically distant. Every time you speak to each other, you barely manage to keep the conversation going.

When you can’t talk to a friend face to face, it means they’re talking behind your back. When you read between the lines, you will discover that your friend hates you and does not enjoy conversing with you.

8. You don’t spend time together anymore.

Close friends spend quality time talking and basking in the euphoria of each moment. Furthermore, they are constantly at each other’s apartments or out and about with each other.

It appears that they can’t get enough of each other’s company. However, if the same person you call your friend finds it difficult to spend time with you, likely, they do not like you very much.

9. They behave differently when they are around you.

Your best friend starts acting strangely around you, especially in public. When you’re together, they begin to act strangely.

While some may argue that this occurs frequently, it could also indicate that they hate you. This type of thing frequently occurs when one party acquires a boyfriend or partner.

It could simply be that your close friend hates the fact that you no longer make time for them.

10. Your best friend begins to hang out with a new group of friends.

There’s nothing wrong with wanting to meet new people and expand your social circle. Consider it a red flag if your closest friend prefers the company of their other friends over yours.

ALSO READ  How to Get a Guy to Stop Asking for Pictures? Actions, Steps and Response

Your friend’s resentment toward you may have compelled them to seek solace in other people.

One of the signs that your friend hates you is that they make every effort to avoid spending time with you. 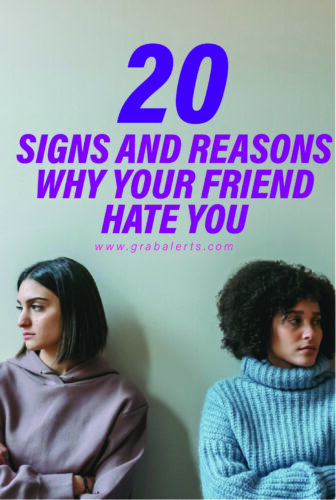 11. Your best friend’s friends dislike you as well.

Meeting the friends of your close friend usually strengthens the bond and trust between all parties.

Ideally, their friends should enthusiastically welcome you into the fold with open arms. However, if the opposite is true and openly expresses their dislike for you, you should pause and reconsider.

True, not everyone is expected to like you, but it should never be universal.

12. Your friend prioritizes her other friends over you.

As your best friend, you would expect them to prioritize you and your needs over their other friends.

When your close friend begins to hate you, they move you down the pecking order.

Assume your friend frequently went out of their way to please you. They no longer like you if they are more concerned with their other friends than with you.

13. They will stop returning your phone calls.

Anyone who hates you or harbors resentment toward you will do everything in their power to avoid you.

Let’s assume your boyfriend hates you; he will most likely ignore your calls whenever you try to contact him. Furthermore, they rarely acknowledge or return calls.

Take note that something you are not aware of may have occurred. Instead of making rash assumptions, investigate why your friend isn’t returning your calls.

14. They aren’t amused by your jokes again.

Ideally, it would be best if you always relied on your jokes to cheer up and lift your best friend’s spirits.

But what if, somewhere along the way, you realize your jokes have lost their impact, and nothing you say sounds funny to them?

The truth is that when someone begins to despise you, no joke on the planet will make them laugh as long as it comes from you.

15. They are offended by everything you do.

Is your relationship with a close friend one in which they become enraged at the slightest provocation for no apparent reason?

It’s most likely because they hate you and despise being in the same room as you, so they easily snap at you.

This is one of the subtle ways in which hatred transforms into something more profound and horrifying.

16. They no longer allow you to use their property.

Friends enjoy doing everything together and sharing their possessions.

As much as friendships aren’t formed for the sake of what you can get out of them, there are times when one must rely on the other for support.

If your friend keeps turning you down or asking for their belongings back, it is properly a red flag that hatred lurks at the corner. 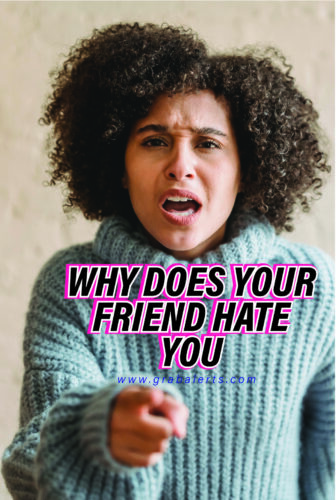 why does your friend hate you?

17. Your discussions are always negative.

It isn’t easy to have a pleasant conversation with someone who hates you.

In every conversation, your friend would complain, blames everyone else, criticizes, and vents their anger and frustration.

Most of the time, these emotions are directed at you, and dealing with them is difficult. It is possible to save the relationship if you can be firm and maintain a calm resolve.

18. They insult you at every turn.

Best friends constantly insult each other without being offended.

If, on the other hand, these insults are intended to bring you down, the person hurling them hates you. Perhaps they insult you in front of other people to irritate you.

The best course of action is to confront the individual and express your displeasure. If it continues, you will have no choice but to end the toxic relationship.

19. They are extremely skeptical of you.

This occurs in a friendship fraught with drama and squabbles sparked by past events. These occurrences give them a reason to be suspicious of you.

Despite being a shameful trait, distrust is a subliminal indication that your friend hates you.

Whenever something goes wrong in the relationship, they point accusing fingers at you without hesitation.

20. They want to sever ties with you.

When a friend hates you, they will use any means possible to end the relationship.

They frequently try to do it not to hurt your feelings or draw too much attention to themselves.

If, after all, is said and done, you believe the relationship is unsalvageable, now might be the time to call it quits and move on.

More About Why Your Friend May Hate You

How to know if your friend hates on you

Here are other signs on how to know that your friend hates you;

Why do my friends hate me for no reason?

Your friends hate you for no reason because they are envious or insecure of you. Perhaps they believe you are better than them, more attractive, happier, or have something they desire. Your friend can also hate you because of misunderstanding.

Why does my friend hate me all of a sudden

This is usually due to a mental illness, a drug addiction, or serious health issues that affect the mind. If their thought process or personality is harmed, they may appear completely different and abandon a valued friendship without cause.

How to ask your friends if they hate you

If you are unable to interact with them in person, try calling or texting them.

Allow your friend to take a break if they are upset. Return later and try to express your feelings to them. Give them some time and talk to other friends if they still don’t want to be friends.

Be direct without being obnoxious. Assume one of your coworkers despises you because of your promotion in the office.

If you still don’t know what caused the issue, say something like,

Advertisements
Continue Reading
You may also like...
Related Topics: